Antonio loved Hinduism.  He created many sculptures and paintings based in and on Hindu mythology.  Here is his rendition of Siva and Parvati.  It is an environment about 18" high.  The profundity of Antonio's work is his deep grounding in western classicism and his direct, original take on the 'East'.  His work is truly the synthesis of east and west.
He actually studied Hinduism with Swami Brahmananda in NYC at one point, guru brother to Swami Vivekananda.  They were disciples of Sri Ramakrishna.

Antonio ended up practicing zen and sat zazen 2 hours daily from the age of 59.  Just sitting and watching his breath. He loved all religions and expressed many of them in his work, but like I said he did many paintings and sculptures of Hindu deities, translating them into an original classical idiom that was a synthesis of East and West. 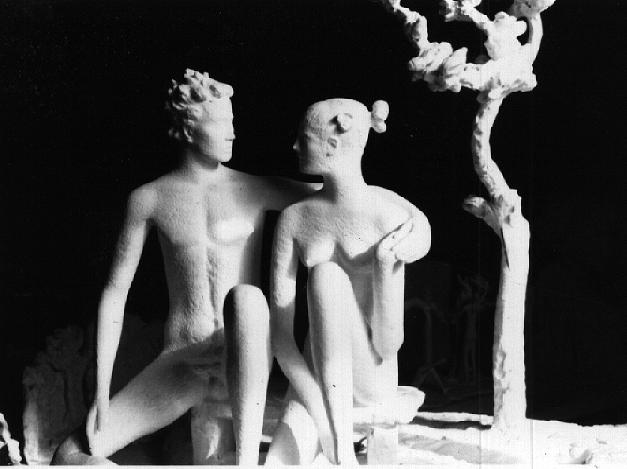 Posted by William DeRaymond at 6:47 AM No comments:

Antonio Salemme 1892-1995 was a friend of Paul Robeson in the 1920's in New York. He met him when Paul was doing the play, Emperor Jones. He envisioned Paul as sculpture and asked if he would model for him. Paul said he would and this is the resulting sculpture. A lifesize figure of Paul, nude with his arms upstretched singing. It was titled "Negro Spiritual". Isamu Noguchi visited
Antonio at his studio around this time and said it set a new standard for American Sculpture.  It gained national notoriety and was banned from being shown at a Philadelphia exhibition. It was shown at the Chicago Art Institute in a show, where it was given an honorable mention. He recounted to me that he had received a letter from the director of the Institute, that it had received first place but due to the 'colored' problem in the city it was only being given an honorable mention!! (The first place prize  was ($2500 no small amount especially at the time.)

There were 2 casts of this original piece made in plaster. One he took to Paris with him pre-world war 2, where he spent time working while the recipient of 2 Guggenheim Fellowships. It was shown at the Tuileries.  The cast was lost during World War 2. I imagine the Nazis destroyed it , but maybe it still exists?? The second was sent on a tour in the American South. Probably not the smartest idea...anyway that one was also lost and most likely destroyed.
The last 10 years of his life Antonio spent time recreating the sculpture from memory half lifesize. I believe the Paul Robeson Foundation has one cast in their collection. I have envisioned this at 15 ft high and a number of them. 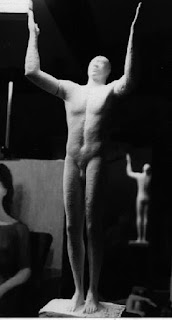 Posted by William DeRaymond at 7:12 AM No comments: